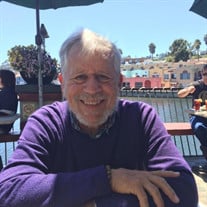 Alan Bradley Falstreau passed away in Grass Valley on October 17th, 2020 from prostate cancer. A gentle man, he was born in Stockton, California on October 3, 1946 to parents Harley Scott Falstreau and Sarah Katheryn Falstreau. The family walnut ranch in Farmington, California was home during his early years, and a source of many happy and idyllic memories. A “Huck Finn” kind of life, he would like to say, spending hours wandering unattended, picking wildflowers and thinking deep thoughts, no doubt. Later Alan graduated from Lincoln High School in Stockton and went on to complete his B.A at the University of the Pacific with a major in Theater Arts. What followed was a nontraditional path, with a trajectory uniquely his own. The American Conservatory Theater in San Francisco employed him as a lighting designer during the late sixties, and then an interest in candle making led him to start his own wholesale candle business. Eventually he became director of a non-profit Art organization, serving developmentally disabled adults which led to a Hot Air Ballooning business, until the need for a real job became clear. That’s when he became district manager for a large food service company. Alan met and married his wife, Marylou in 1976 and during his last years, he and Marylou partnered in an Inspirational Art business that brought Joy and purpose to them both. He was known for hearing inspired “whispers” and sharing them through his blog. Before settling back in Grass Valley, where they raised their family, Alan and Marylou lived on the Central Coast and in the desert of California, eventually deciding the foothills felt most like home. Alan’s biggest joy came from his sons, Nathan and Matthew, Daughter-in-law Lizet, and grandbaby, Joaquin. He loved them best. He would often comment on how lucky he was, and he was. A special thank you to the beautiful team of helpers at “Hospice of the Foothills,” who made Alan’s last days so much better. With gratitude for you.

The family of Alan Bradley Falstreau created this Life Tributes page to make it easy to share your memories.

Alan Bradley Falstreau passed away in Grass Valley on October...

Send flowers to the Falstreau family.