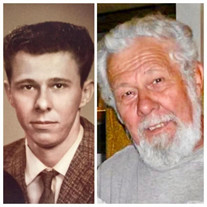 Ray loved the outdoors; he loved Nevada County; he loved tinkering and repurposing ‘junk’- giving new life to discarded refuse. Ray loved to work, old western movies, classic cars, old dogs … mostly, Ray loved his family. He was born in West, Texas on December 11, 1937 to George and Rosalie Blahuta. He grew up with his younger brother, William “Billy”, in Waco, TX, in the house their parents built. Ray was an industrious young man, who thought that working on motorcycles and various ‘odd jobs’ to help his family, was better than continuing school beyond 8th grade. He developed his skills in carpentry, electrical and plumbing, just like his father. He continued throughout his life improving on and learning new trade skills, making him a bonified “Mr. Fix It”; a handyman who could do it all. In the 1960’s, Ray found himself living in California, as a permanent resident. He and his uncle, Ray Uptmor, started camping and panning for gold in Northern California– Ray fell in love with Nevada County and the Yuba River. So much so, that he and his uncle would make several treks per year to pan. In 1971, Ray married Barbara (Dart) of Riverside, CA and a year later, adopted Barbara’s daughter, Roberta. The family made a home in Perris, CA. Ray continued his adventures in the Sierra Mountains and foothills of Northern California… In, 1980, the family moved and started building their new home in North San Juan, CA. Ray continued working as a carpenter and handyman. He started working for Pine Tree Mobile Home Park and Boat Storage in Camptonville, where he also maintained boats on Bullard’s Bar. If you saw him and said “Hi”, he would stand and talk with you for a while… about most anything…always one for making new friends. Aubrey “Ray” Blahuta, of North San Juan, CA, left us on July 1, 2020 at the age of 82, after an intense battle with acute kidney failure. Ray is survived by his wife Barbara, his daughter Roberta Blahuta Peters of Grass Valley, his brother, William Blahuta of Robinson, TX, Uncle Ray Uptmor of Long Beach, CA, granddaughters Jordan Noury of Alturas, CA & Shelby Peters of Reno, NV, grandson Robert Peters of Grass Valley, three great-grand-children and many nieces and nephews. Donations in his name may be made to Hospice of the Foothills and Sammie’s Friends. Due to Coronavirus restrictions, there will be no memorial service.

The family of Aubrey "Ray" Blahuta created this Life Tributes page to make it easy to share your memories.

Send flowers to the Blahuta family.