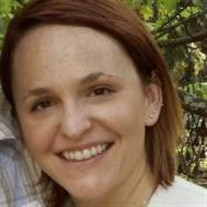 Chelsea Marie Fox left this life September 3rd, 2018. She was born June 12, 1982 at Sierra Memorial Hospital. Chelsea grew up in Rough and Ready with her sister Amy and two imaginary friends Maria and Tressie. Chelsea flourished in elementary school and high school and was a 4-H-er, showing pigs at the Nevada County Fair. She won admission to Scripps College, being announced as "the firefighter from Rough and Ready, California." She was a fire cadet, fire fighter and EMT with Nevada County Consolidated. Chelsea later transitioned to Cal Fire as a communications operator, 911 operator for Nevada, Yuba and Placer Counties. She found her calling in this profession. She helped people in their darkest hours as the calm voice on the other end of the phone. This brought her a deep satisfaction. Chels was an amazing baker; following to the gram, Thomas Keller recipes. She made quilts as well as apothecary oils and salves. She was a chicken whisperer and a cat herder and is survived by her husband, Marc Zayas; her two cats, Martis and Toonces; parents, Ray and Janis Fox; sister, Amy Fox; brother-in-law, David Ridlehuber; her beloved niece, Delilah Fox Ridleuber; and many cousins, aunts and uncles. There will be a Memorial Service at 1 p.m., on Monday, September 10, 2018 at Hooper and Weaver Mortuary, 459 Hollow Way, Nevada City, Ca 95959. In lieu of flowers, in honor of Chelsea please donate to Yuba Net as well as Nevada County Pets of the Homeless paypal.me/ncpoth.

The family of CHELSEA MARIE FOX created this Life Tributes page to make it easy to share your memories.

Send flowers to the FOX family.