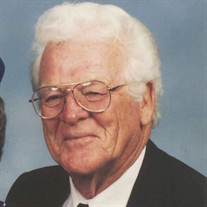 Dennis Arthur Wilson passed away April 17, 2019 in Grass Valley, CA. He was 96. He was born August 31, 1922 in Los Angeles, CA to Charles and Joan (Hudon) Wilson. He enlisted in the Army Air Corp November 24, 1942 and served as a Technical Sergeant until he was honorably discharged on November 17, 1945. He earned a B.A. in Business, owning and operating a auto and motorcycle dealership, later enjoying self-employment as a real estate broker. He married Joyce M. Hannahs on January 16, 1982, and spent 37 years as a Grass Valley resident. He enjoyed gardening, and belonged to the Knights of Columbus and the Elks Lodge. Mr. Wilson is survived by his wife Joyce; daughters Denise Nielson of Truckee, CA, Diane Bacon of Auburn, CA; son Patrick Wilson of Sacramento, CA; step children, John Hannahs of Rough and Ready, CA and Jacki McHone of Olivehurst, CA; ten grandchildren and 11 great grandchildren. He was preceded in death by his daughter, Janine Wilson. A service will be held at 10 a.m., on April 29, 2019 at St. Patrick’s Church in Grass Valley. In lieu of flowers, memorial contributions may be sent to Hospice of the Foothills, 11270 Rough & Ready Hwy, Grass Valley, CA 95945.

The family of DENNIS ARTHUR WILSON created this Life Tributes page to make it easy to share your memories.

Send flowers to the WILSON family.