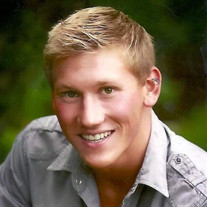 Dominic Phillip Joseph Daniel Giuliani of Grass Valley passed away after a motor vehicle accident on January 27, 2018. He was born on July 10, 1997 in Grass Valley, CA and resided there through much of his life. He was a Valedictorian at Nevada... View Obituary & Service Information

The family of DOMINIC PHILlIP JOSEPH DANIEL GIULIANI created this Life Tributes page to make it easy to share your memories.

Send flowers to the GIULIANI family.