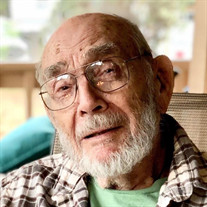 April 15, 1924 – December 26, 2020 Donald A Eaton long time resident of Grass Valley passed away Dec 26, 2020. A proud American whose ancestors were early pioneers to both the American colonies and California. He could trace his descendants back to Isaac Allerton of the Mayflower. His California roots started in 1852 when his Great Great Grandfather, Joshua Variel and family settled in Camptonville then later moving to Quincy, their ancestral home is part of the Plumas County Museum. Don was born to Donald and Leora Eaton of Ventura in 1924. Don was a machinist for Douglas Aircraft Company before enlisting in the USAAF and serving in the Philippines during WWII. After the war Don settled in Oakland and married Edith Hoffman, a recent transplant from the Berkshire Valley in New Jersey. He worked as a machinist for the City of Oakland and served in the USAF Reserves. In 1954 they moved to Fremont where he owned and operated the Midway Auto Repair Shop. In 1965 he became a teacher and taught Vocational Education, becoming the Department Chair at Oakland Technical High School. Don and Edith retired to Grass Valley in 1987. Don is survived by his two daughters, Linda Sisneros of Dutch Flat, an English high school teacher and Susan Harrison, and her husband Richard (USAF) of Grass Valley. Also surviving are four grandchildren, Andre Sisneros, a Physics teacher at Redwood H.S. in Larkspur, CA. and his wife Wynona, Jenny Gladheim (USN) an RN and her husband Christopher (USMC) of Poway, CA, Kristen Cason an RN and her husband Justin (USMC) also of Poway, and Jeremy Harrison (USMC) an Auto Mechanic at Anton’s Import Auto in Grass Valley and his wife Roxanne. Don is also survived by nine Great Grandchildren; Matthew, Kathryn, Grace, and Sarah Gladheim, Emelia and Camryn Peterson, Justin Cason Jr, and Isabel and Gabriel Harrison.

April 15, 1924 &#8211; December 26, 2020 Donald A Eaton long time resident of Grass Valley passed away Dec 26, 2020. A proud American whose ancestors were early pioneers to both the American colonies and California. He could trace his descendants... View Obituary & Service Information

The family of Donald Austin Eaton created this Life Tributes page to make it easy to share your memories.

Send flowers to the Eaton family.