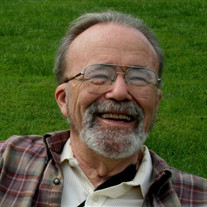 Donald Wing Sawtelle, Jr., age 95, passed away peacefully in his home on August 21, 2019. Don was born in Springfield, Massachusetts in 1923. He and his parents and two brothers lived in Maine and Washington D.C. during the Great Depression. He loved telling stories of his parents’ cleverness during those times; he was proud of their ability to cope with hardship. A highlight of Don’s high school experience was being part of the school newspaper. After high school, he worked at a machine shop for several years, managing up to 80 employees. His hobby during this time was building and flying model airplanes. This hobby and the machine shop job contributed to his decision to study engineering. Don served in the Army Air Corps during World War II. After his discharge in 1946, he enrolled in the University of Maryland. He met his wife Marie there, and they were married in 1949. Don graduated in 1952 with his degree in mechanical engineering. He and Marie settled in the Washington D.C. area. Don loved anything that involved tools and design and assembly, such as building houses and restoring furniture. Early in his marriage, he helped Marie’s parents build a new house on their farm in Manassas, Virginia. He rescued and restored antique furniture found in the fields on that farm. Then, in the late 1950’s, Don designed and built a home for his family in McLean, Virginia. In 1965, Don accepted a job at Beckman Instruments in Southern California and moved his family there. In 1974, he and Marie moved to Houston so Don could work for Bechtel Corp. They lived in Houston over 30 years. He remained active in his retirement – building a garage addition to his house and building beautiful replica antique furniture from kits. He and Marie moved to Nevada City in 2007 to be close to family. Don was predeceased by his wife, Marie, in 2015. He is survived by his children Susan Vanderpol and Sandra Palmer of Nevada County, Sharan Moothart of Seattle, and Don Sawtelle III of Sonora, CA; 12 grandchildren; and 19 great grandchildren. Burial will be in the family plot in Springer Cemetery in Sidney, Maine.

Donald Wing Sawtelle, Jr., age 95, passed away peacefully in his home on August 21, 2019. Don was born in Springfield, Massachusetts in 1923. He and his parents and two brothers lived in Maine and Washington D.C. during the Great Depression.... View Obituary & Service Information

The family of Donald Wing Sawtelle JR created this Life Tributes page to make it easy to share your memories.

Send flowers to the Sawtelle family.