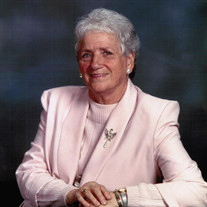 E. Lorraine Blakley was born on March 3, 1932 in Oakland, CA to Ward and Elizabeth Miller. She passed away peacefully from Parkinson’s on November 26, 2020 at the age of 88. She resided at Spring Hill Manor in Grass Valley and was surrounded by family the last few days of her life. Lorraine graduated from Castlemont High School and married Lester Blakley in 1951 (div. 1978) and then married Thurman Posey in 1979 (div. 1985). She worked at Data Documents in Hayward for over 20 years where she met her future daughter-in-law, Diane, who she introduced to her son David. She was very active in her church, Neighborhood Church, in Castro Valley and was prolific in sewing, quilting, jewelry making (she was known for her potato necklaces), cooking, and playing games. In her younger years, she bowled in many leagues in Hayward and San Leandro. She was an avid sports fan including watching her kids and grandkids play to watching pro-baseball and football games and attending high school games with friends. Lorraine had a way of making sure that people ‘towed the line’ and when she loved you, there was no doubt. Up to the end, she enjoyed dressing up and making sure she always had her lipstick on and her nails done. She was a classy lady who impacted many peoples’ lives and made everyone feel special. Lorraine was preceded in death by her parents, son Donald, sister Sharon Lacy and brother Ward Miller. She is survived by her children David (wife: Diane) of Grass Valley, Sheri Jackson (husband: Robert) of Livermore, Jeffrey of Fresno, step children: Rodney Posey (wife: Leticia) of Volcano, Lisa Veasy and Stacey Walton of Texas, her sister Joyce Craig of Dublin, eight grandchildren and twelve great-grandchildren. Burial preparation is through Chapel of the Angels. Interment will be at Oakmont Cemetery in Lafayette, CA. Services will be at a later date.

E. Lorraine Blakley was born on March 3, 1932 in Oakland, CA to Ward and Elizabeth Miller. She passed away peacefully from Parkinson&#8217;s on November 26, 2020 at the age of 88. She resided at Spring Hill Manor in Grass Valley and was surrounded... View Obituary & Service Information

The family of E. Lorraine Blakley created this Life Tributes page to make it easy to share your memories.

Send flowers to the Blakley family.