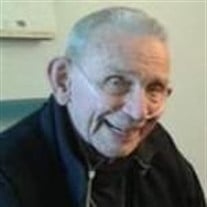 In loving memory of Eugene Godfrey 3/19/1927-9/06/2019 who was preceded in death by his wife Jeanné, mother Emma Margaret, & his father Jack. He passed peacefully in his sleep with 3 of his 4 children by his side at 3:10 pm. He is survived &... View Obituary & Service Information

The family of Eugene Godfrey created this Life Tributes page to make it easy to share your memories.

Send flowers to the Godfrey family.