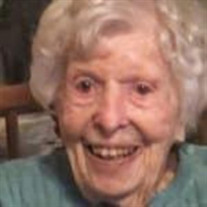 Florence (Flo) Elizabeth James passed peacefully in her Grass Valley home, and joined Pop, on April 18, 2020 at the age of 100. She was born on February 22 1920 in Oakland CA to Dayton and Mable (Spohn) Osincup and had one brother and two sisters. Flo graduated from San Leandro High School in Oakland and then attended San Jose State College. In 1943 Flo joined the Navy and was one of the original women libbers. She was in the first group of WAVES assigned to Kaneohe, HI, where she worked on aircraft. She refused to climb ladders in her uniform dress and instead purchased and wore her own dungarees. It was there that she met the love of her life, John James, where they both served as aviation mechanics. She and John both loved the Navy but agreed that meeting each other was the highlight of their time in the Navy. In 1945 they separated from the Navy, married in 1946, and moved to San Andreas, CA. John and Flo built their home and later a cabin in the Sierras which remains a family treasure. It was also in San Andreas that they raised their children, Al, Ken, and Karen. In 1981 Flo designed a home that their son, Ken, built, and moved to Valley Springs, CA. In 2014 John and Flo relocated to Cascades in Grass Valley, where after nearly 70 years of marriage, John (Pop) passed in 2015. She loved the Cascades family, and absolutely loved living there. Flo had many interests and skills. She was a talented draftsman who designed many homes. She was also an avid golfer and tennis player. Flo knitted and crocheted and all family members have beautiful ski sweaters and afghans providing winter… and lifetime warmth. John and Flo loved to travel and visited over 40 countries. In addition to the cabin, their real legacy is family. Flo was the matriarch of the “James Gang”. She was so loved and respected by friends and family. The “kids”, cousins, and “outlaws” play well together and are more than family. They are friends and share the love and bonds John and Flo instilled. They were the original Ozzie and Harriet. Flo is survived by sons, Al James (Mary) of Reno, NV and Ken James (Trisha) of San Andreas, CA: daughter, Karen James-Baltzell (Bill) of Penn Valley, CA; four grandchildren: Tyler James (Alex), Lindsey (James) Abdullah (Ish), Krista (Baltzell) Feagans (Mike), Jamie (Baltzell) Slough (Clay)and four great grandchildren: Tayvin Slough, Adelynn and Cora Feagans, and Colton James. A family celebration of her wonderful life will be held at the cabin this summer. Arrangements are under the care of Chapel of the Angels Mortuary in Grass Valley (530) 273-2446. Donations to the Hospice of the Foothills would help to pay it forward.

Florence (Flo) Elizabeth James passed peacefully in her Grass Valley home, and joined Pop, on April 18, 2020 at the age of 100. She was born on February 22 1920 in Oakland CA to Dayton and Mable (Spohn) Osincup and had one brother and two sisters.... View Obituary & Service Information

The family of Florence James created this Life Tributes page to make it easy to share your memories.

Send flowers to the James family.