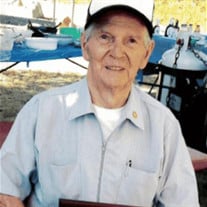 Frank Luporini was born in San Ginese, Lucca, Italy on June 4, 1920. He immigrated to the United States with his parents, sister and brother when he was 10 years old. In school, he was placed in 2nd grade and quickly learned English and advanced to his normal grade level. He wanted to become an engineer. After graduation from 8th grade he joined the work force earning .35 cents a day to help support his family. Frank worked hard all his life, sometimes holding two jobs and eventually became an owner of Brice Bros. Produce at SSF Produce Terminal. He was well liked and remembered as being a kind, friendly guy with a smile for everyone. He met his future wife Josephine on a tennis court in San Francisco. He had never played tennis and was invited to play. She won that game and he later came back to eventually win her heart.They were married for 62 years and had two children. Frank was a member of the Penn Valley Rotary, Gold Country Italian American Club, and the LWW Bocci Ball Club. He enjoyed bowling, golf, tennis, bocci ball, card games and dominoes. He is survived by his daughters Betty (Dennis Neil) Torresdal, and Barbara (Harvey) Long, and also his first cousin Tullio Marchetti. He has 8 grandchildren, Kevin Torresdal, James (Tina Andolina) Long, Candice Torresdal, Debby (Brian) Rankin, Kyle Torresdal, Eric Torresdal, Brock (Angela) Torresdal and Steve (Lindsey) Long, 6 great-grandchildren,Aubrey, Soren, Bristol, Macy, Sofia and David. He has 13 nephews and nieces and their families living in the United States, as well as other relatives living in Italy. He was preceded in death by his wife Josephine and his sister Lena DalPorto, and his brother Evo Luporini. He passed away peacefully of natural causes on May 2, 2020. Frank was 99 years old. Donations may be made to Penn Valley Rotary, Salvation Army,Sammy’s Friends, or personal preference. Burial services were held at Holy Cross Catholic Cemetery.

Frank Luporini was born in San Ginese, Lucca, Italy on June 4, 1920. He immigrated to the United States with his parents, sister and brother when he was 10 years old. In school, he was placed in 2nd grade and quickly learned English and advanced... View Obituary & Service Information

The family of Frank Luporini created this Life Tributes page to make it easy to share your memories.

Send flowers to the Luporini family.