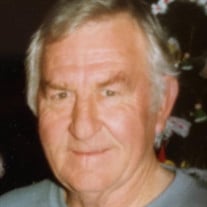 July 13, 1929 – January 23, 2021 Eugene “Gene” Dwayne Chizek of Grass Valley, CA, passed away at home on January 23,2021, surrounded by several family members. Born on July 13, 1929, at home near property homesteaded by his grandparents in Chadron, Nebraska, Gene was the oldest of four children born to Eugene Charles Chizek and Fern Beatrice Brown Chizek. Living near the Pine Ridge Indian Reservation, Gene learned to speak the language of the Sioux in addition to Czech and English. In 1941, the family moved to Torrance and then to Simi Valley, Ca. He graduated from Simi High School in 1947. As a lifelong learner, he earned a Bachelors Degree in Criminal Justice and another in Sociology. Gene met Mary Ann Tiernan when she spent summers with her aunt and uncle in Simi Valley. They were married April 21, 1951, prior to his deployment during the Korean War, to Germany for the U.S. Army. It was his ability to quickly learn German that kept him from being sent to Korea. While in Frankfurt and Kaiserslautern, he served as Military Police Officer. After his discharge in 1953, they made their home in Simi Valley, later moving to San Jose where he worked for Lockheed Corporation as a Military Acquisition Specialist. In 1958, the still growing family moved to Anaheim where Gene’s interest in law enforcement led him to Orange County Sheriff’s Department. He had an illustrious career starting as Patrolman and retiring as Lieutenant in 1979. In between, he trained fellow officers, worked vice and homicide and served the last nine years as a renowned Narcotics Detective. He was also a liaison to the Secret Service for then-President Richard Nixon, who later gifted him prized cuff links. Following his retirement, he taught Criminology at Orange Coast College and then courses relevant to Narcotics Law Enforcement for both the Department of Justice and Federal Bureau of Investigation. He received numerous awards including Sons & Daughters of the American Revolution’s Law Enforcement Instructor of the Year award. And, as family and friends can attest, the years in his beloved career provided a truly endless source of entertaining stories. Moving to Nevada County, the Chizeks settled in a portion of Grass Valley formerly known as the town of Wolf, on a small ranch where he resided since retiring 42 years ago. Eugene and Mary Ann had five children: Richard, Cathy, Frank, Steve and Theresa. Gene was preceded in death by his wife of 60 years, Mary Ann; daughter Catharine L. Lind; son (Eugene) Richard Chizek. He is survived by son Frank M. Chizek (Karen Boettcher-Chizek), son Steven Chizek (Therese Lough); daughter Theresa M. Bailey; sister LaDyne Luster. He also is survived by his grandchildren: Jennifer Chizek-Sager; Jason Chizek (Danne); Chad Medlyn (Nikki); LeAnn Boutte (Justin); Candice Bailey-Hunter (Taya); Drew Bailey (Cassie); Sierra Spencer; Clayton Jones (Jennifer); Christen Watkins (Ben); Liana McGlade; Emily Cole (Alan). He had thirteen great-grandchildren and a plethora of cousins, nieces and nephews. A memorial service will be scheduled at a later date at Loney-Sanford Ranch Cemetery in Grass Valley, where he’ll be laid to reside alongside his wife.

The family of Gene Dwyane Chizek created this Life Tributes page to make it easy to share your memories.

Send flowers to the Chizek family.