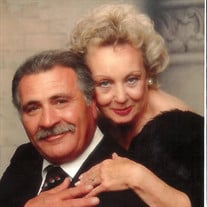 Gerald Elmer “Butch” Goetz, 77, passed away Saturday night, September 7, 2019 in Penn Valley, California. He is survived by his son Jeff Boersma, grandson Jonathan (Brittany) Boersma, granddaughter Elle Damiano, sisters; Sandra (Jack) Berger, Sharon Goetz, Jody (Eduardo) Palermini, brothers; Tom Goetz, Steven (Tracy) Goetz as well as numerous extended family and friends. Butch was preceded in death by his wife Phyllis Rosenow Goetz, son Rodney Boersma, brother Dennis Goetz and his parents Edward and Agnes Goetz. Butch was born on August 27, 1942 in Brighton, Colorado. He was the eldest of seven children to Edward and Agnes Goetz. He was the rough and tumble son of a farmer and Butch rode horses and Bulls. The last one put him in the hospital and almost killed him. One of his first jobs was loading 100lb. sacks of Purina Dog Food onto a truck. He was proud of that job because he said, “That was good, honest work.” After that he went to parachute school to do some death defying jumps. He was mechanically inclined and very much a dreamer. At a young age, he left Colorado and travelled around the United States before moving to California. That is where he met Phyllis and they were married in 1968. He co-founded a Medical Company called Goetech/Med Keeper whose products were designed to help and protect people. But most of all, he was a good husband, father, grandfather, brother, son and friend, who always had a story or two to tell. We love you Butch! Services for Butch will be held in Colorado at a later date.

The family of Gerald Elmer "Butch" Goetz created this Life Tributes page to make it easy to share your memories.

Send flowers to the Goetz family.