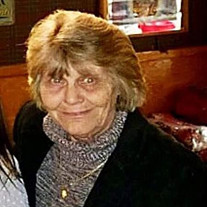 Janice “Jannie” Roleder was taken way too soon. Jannie passed in her sleep on the morning of July 1, 2019. Jannie was born and raised in Newcastle, Ca. She is the youngest daughter born to Norma Lane Roleder and Lawrence John Roleder, she lived in Sacramento, Ca before relocating to Grass Valley in 1979 where she opened the Grass Valley Kmart as the Café Manager. After her time at Kmart she became a Ranch Manager where she cared for rescued burros, sheep and chickens. She continued to care for these animals when she moved to a new ranch on McCourtney Road. This is where she fondly referred to her new ranch as the 15 B, 15 Animals and a Buckskin. The Buckskin is Lacy and definitely the horse of Jannie’s dreams. Jannie always wanted a Buckskin and was able to locate the perfect one in Crescent City about 28 years ago. During her time at the 15 B, Jannie worked for the Tack Room in Penn Valley, CA and this is where she became a beloved fixture behind the bar and serving her friends who became her family. Jannie was a selfless person who cared for her mother Norma until her passing in November of 2006. She also cared for her Penn Valley family by taking friends shopping and to doctor’s appointments. Jannie was a no-nonsense person and if you knew her you know this is true. She had a hard exterior but was such a sweet person and would give you the shirt off of her back. Jannie had the kindest heart and loved her Tack Room family. Barbara and Al were very important to her, she considered them her family. Jannie enjoyed many adventures with Barbara and definitely enjoyed traveling to Las Vegas, New Orleans and their annual Santa Cruz trip. Jannie is survived by Lacy (her horse), Smidge (her cat), Moe (her guinea hen), her brother Larry Vicory (Rita), niece Lisa, nephews Michael (Amber), Thom and Bob, sister Judith, nephew Shawn, niece Denise Johnson (Craig), great-nieces Ellie, Katie and Anna, and great-nephews Justin and Ben. She is preceded in death by her mother Norma (2006), and her brother-in-law Bart (2006). A potluck celebration of life will be held at the Tack Room on Sunday, July 14th, 2019 from 1-4 p.m. Please wear your best Raider Gear or black and silver for Jannie’s beloved Raiders send off. In lieu of flowers there will be a community donation to help with burial cost.

Janice &#8220;Jannie&#8221; Roleder was taken way too soon. Jannie passed in her sleep on the morning of July 1, 2019. Jannie was born and raised in Newcastle, Ca. She is the youngest daughter born to Norma Lane Roleder and Lawrence John Roleder,... View Obituary & Service Information

The family of Janice "Jannie" Roleder created this Life Tributes page to make it easy to share your memories.

Send flowers to the Roleder family.