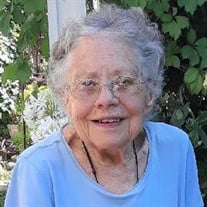 JoAnne Snapp passed away peacefully at home on August 2, 2019. JoAnne was born March 13, 1929 in Merrill, Oregon. Her parents were Oregon homesteaders and she was the second youngest of nine children. Growing up she participated in such clubs as Student Council, Pep, 4-H, and Glee. She was a Potato Festival Queen and received Grand Champion for her steer. She fondly remembered growing up on the family farm and being surrounded by the high desert ranch land with her loving, supportive family and a close-knit community. Special memories include riding her horse, swimming and ice skating on the irrigation canals. She was nicknamed Chuckie and her many relatives still refer to her as “Aunt Chuckie.” JoAnne attended Oregon State University and graduated from University of Southern Oregon with a Bachelor of Arts in Education. She married her beloved husband Ursal Snapp in 1949 and they had 60 years together. They moved to Nevada County in 1956 where they built and established their home. JoAnne was a devoted mother and homemaker. She was a Girl Scout and 4-H leader. For two decades she led the 4-H sheep project and her children had champion lambs for Nevada County 4-H and FFA fair. There were always many other animals at home to attend to such as horses, steers, chickens, pheasants, and pet dogs and cats. She was an excellent seamstress and was a 4-H sewing leader. She canned and made preserves from the many fruit trees and vegetable garden. After the animals were gone, she and Ursal established “Snapp Ranch Vineyard” and they harvested grapes and made wine. JoAnne substitute taught in the local elementary schools and was a chaperon for the NUHS Vienna choir in 1981. She served on the American Legion Auxiliary. Holidays and vacations were often spent in Oregon visiting or family camping at the coast. Later in life she continued to play Bridge with her group of long term friends. She also had her very special group of artist friends that met weekly. JoAnne was a gifted painter and made many beautiful pieces over the years. She was passionate about her beautiful yard landscape. JoAnne made tremendous effort to attend family and local events. She always remembered birthdays, took pictures, and mailed greeting cards. Family genealogy and preserving its legacy was important to her and she kept a family tree and many photo albums. During Ursal’s long decline of health the house was remodeled so they could remain at home and she could care for him. JoAnne liked to spend her leisure time reading, keeping up to date with politics, or sitting on the patio next to her Koi pond. She chose to stop driving at age 89. She celebrated her 90-year birthday at a luau themed party surrounded by family and friends. She is survived by her four children, Sandra Forrest, Sara Nadeau, Jerel Snapp (Karen) of Grass Valley and Carolyn Lewis (Stan) of Auburn. Her grandchildren are Michael Forrest, Jodi Daniels (Ed), Matthew Nadeau (Chelsea), Jessica Renda (Matthew), William Snapp, Spencer Lewis, and Audrey Lewis. Her great grandchildren are Madison Pierce, Peyton Pierce, Andrew Daniels, Finesse Nadeau, Velocity Nadeau, and Luke Renda. She was preceded in death by her husband, Ursal Snapp, her parents Lewis and Edith Kandra, her brothers Lawson, Carrol, Ivan, and her sisters Bernice, Wanda, Doris, Ida, and Lois Lea. Interment will be at the Merrill Oregon IOOF Odd Fellows Cemetery.

JoAnne Snapp passed away peacefully at home on August 2, 2019. JoAnne was born March 13, 1929 in Merrill, Oregon. Her parents were Oregon homesteaders and she was the second youngest of nine children. Growing up she participated in such clubs... View Obituary & Service Information

The family of JoAnne Snapp created this Life Tributes page to make it easy to share your memories.

Send flowers to the Snapp family.