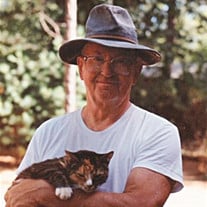 John “Jack” Robert Conner, a longtime resident of Nevada County, died on July 6, 2019 at Golden Empire Nursing and Rehab Center in Grass Valley. He was 91. John was born on November 22, 1927. He was a proud descendant of immigrants who landed on the rocky shore of Maine in 1635 and who migrated west to California in the 1850s. He grew up primarily in Marin and Sonoma counties, and aside from stints in the Navy during World War II and the Army during the Korean War, lived almost all of his life in Northern California. After graduating from University of California, Berkeley with a degree in economics, he married Gaylo Enid Gerken of Palo Alto, also a graduate of UC Berkeley and at the time a stewardess for United Airlines, on December 5, 1951. They raised their two children in Visalia, CA, where Jack worked as vice-president for sales at Wheeling-Pacific, a manufacturer of plumbing and irrigation supplies in nearby Woodlake. In the mid-1970s, they moved to Nevada County, where they built a home in Grass Valley’s Sherwood Forest subdivision and he worked as an agent for Farmers Insurance. In retirement, he served a term on the Nevada County civil grand jury and volunteered at the California Highway Patrol and the Nevada County Sheriff’s Department. A man of strong opinions, Jack was a lifelong conservative Republican, who nonetheless worried deeply about the accumulating impact of climate change. He loved travel, his Cal Bears and the 49ers, cats and corny jokes, but nothing more than river-rafting, cross-country skiing and hiking with Gaylo and their friends through the canyons and on the ridge tops of his beloved Sierra. He is survived by his wife Gaylo Gerken Conner of Grass Valley; his son Ken (Christine Cuccia) Conner of San Francisco; his daughter Carol (Jeff) Turner of San Diego, and his granddaughter Jessica Conner of San Diego. At his request, there will be no service. Arrangements are under the care of Chapel of the Angels Mortuary and Crematory.

John &#8220;Jack&#8221; Robert Conner, a longtime resident of Nevada County, died on July 6, 2019 at Golden Empire Nursing and Rehab Center in Grass Valley. He was 91. John was born on November 22, 1927. He was a proud descendant of immigrants... View Obituary & Service Information

The family of John "Jack" Conner created this Life Tributes page to make it easy to share your memories.

Send flowers to the Conner family.