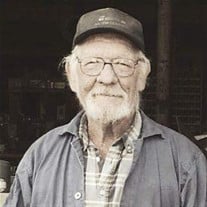 John Davis passed away on Sunday, March 4, 2018 in North San Juan. He was Born in Alamogordo, New Mexico, July 14,1947 to Laverne and George Harrison Davis. In the early 1950's, the family moved to the San Gabriel valley, after which John and his four sisters were placed in a children's home. After living in the children's home for about eight years, John moved back to San Gabriel valley where he started going to the Irwindale raceway to watch the "funny cars" race, which got him hooked on automobiles and mechanics. At 18, John joined the navy, was stationed briefly in Hawaii (second love in his life) before being shipped to Vietnam where he was part of the construction battalion (cb), gaining valuable skills operating and repairing heavy equipment, among other things. After being discharged from the navy, John moved back home to Southern California to help his mother raise his three younger sisters. John spent many years working in tire shops and exploring the country before moving to the North San Juan Ridge to live on his sister's land. He loved gold mining (mostly panning) and learning about the history of the region with his brother-in-law and friends. Eventually, John discovered his calling at the Whittlesey Junk Yard, where he worked seven days a week from dawn to dusk. His great love and respect for the family patriarch, Tabor Whittlesey, solidified his bond with the whole Whittlesey clan, so much so that he was often thought to be one of the family. John loved helping people at little to no cost, always gave sage advice, and always brought humor to each interaction. He will be missed. Survived by sisters, Barbara Herm, Alice Navarro, and Chris Woods; nephews and nieces Theresa Navarro, Thomas Cook, April Woods, Samantha Woods, Rachael Navarrete, Eric Herm, Lief Herm, Jason Herm, And Heidi Ryan; great nephews and nieces Gideon Navarrete, Violet Navarrete, Danielle Husband, Ashley Husband, and Mason Ryan. He was preceded in death by his parents Laverne and George; sister Syble Louise Wilkie; brother-in-laws Hans Herm, Don Navarro and Frank Cook, as well as nephew David Navarro. There will be a potluck memorial service at 2 p.m., on Saturday March 31, at the North San Juan FPD Station 1, 10057 Reservoir Street, North San Juan.

John Davis passed away on Sunday, March 4, 2018 in North San Juan. He was Born in Alamogordo, New Mexico, July 14,1947 to Laverne and George Harrison Davis. In the early 1950's, the family moved to the San Gabriel valley, after which John and... View Obituary & Service Information

The family of JOHN LEE DAVIS created this Life Tributes page to make it easy to share your memories.

Send flowers to the DAVIS family.