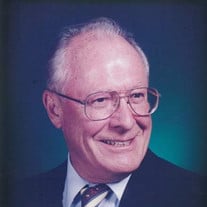 John “Jack” Francis Rossiter passed away on Monday, June 24, 2019. He was 93. A Mass of the Resurrection to celebrate Jack’s life will be held at 11 a.m., on Wednesday, July 3, 2019 at St. Patrick’s Catholic Church in Grass Valley, Ca. preceded by a Rosary at 10:30AM. A private interment will be held at St. Patrick’s Catholic Cemetery at a later date Jack was born on June 24, 1926 in Yonkers, New York to Harry Prince and Margaret Mary (Cuddihy) Rossiter. Jack served in the United States Navy from 1944 to 1947 last on the USS Wisconsin and was on board ship at the signing of the surrender by the Japanese. He was awarded the American Theater Medal, Asiatic Pacific Medal, Philippine Liberation Ribbon and the Victory Medal. On November 17, 1956, Jack married Robina “Ruby” Currie McAtee at St. Anne’s Catholic Church in San Francisco. After living in the San Francisco Bay area for a number of years, Jack and Ruby with their son, Michael, moved to Lake Wildwood, CA. Jack loved his wife, sons and grandchildren. He was a member of the Holy Names Society in San Francisco, was actively involved with St. Patrick’s Catholic Parish and the Knights of Columbus in Grass Valley. He is survived by his sons Michael Rossiter of Grass Valley, CA. and Kevin Rossiter and his grandchildren of San Jose, CA; Also; his sister, Gloria “Go” Rossiter of Florida, his nieces, June and Carol, their children and grandchildren Jack was preceded in death by his wife, Robina “Ruby” Currie (McAtee) Rossiter; parents, Harry Prince and Margaret Mary (Cuddihy) Rossiter; siblings, Clarice Rossiter, Grace Whitehead, Margaret, June, Baby boy Rossiter, Harry and Nicholas Rossiter and 2 infant brothers who died in childbirth. In lieu of flowers please make donations to Mount St. Mary’s School, St. Patrick’s Catholic Church and Hospice of the Foothills, all in Grace Valley. Arrangements are under the care of Chapel of the Angels Mortuary in Grass Valley.

The family of John "Jack" Francis Rossiter created this Life Tributes page to make it easy to share your memories.

Send flowers to the Rossiter family.