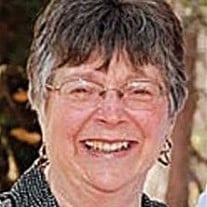 Linda Williams passed away the evening of February 11, 2019, at her home in Grass Valley, with her husband and her two daughters by her side. She was born in 1945 in Houston, Texas where her father was serving in the Army Air Corps. Shortly after her birth, her family moved back to their home state of Colorado, ultimately settling in Lakewood where she attended school. She graduated from Lakewood High School in 1963. She then enrolled at Colorado State University where she met her future husband Curtis (Curt). They were married in August 1964 in Lakewood. Linda worked to help support her husband as he completed his education. Their oldest daughter, Cindy, was born in Fort Collins shortly before they moved to Los Angeles where Curt was assigned as an officer in the Air Force. Their second daughter, Trudy, was born in Los Angeles. While they thought they would return to Colorado after completion of their Air Force assignment, they have resided in California the entire rest of their lives, living in both Northern and Southern California. Linda worked for a number of years in the Real Estate Industry serving as Executive Director for two Board of Realtors, one in Ukiah, CA and the other in Menlo Park, CA. She loved being a mother and a grandmother and took great pride in the growth and development of her daughters and granddaughters. She was instrumental in the establishment of many family traditions especially related to the Christmas holiday. She also was very understanding in living through numerous house remodeling projects over the years and finally had the opportunity to help design a house from scratch here in Grass Valley. She loved plants and gardening. She has nurtured a huge Christmas Cactus for over 40 years. She also enjoyed painting, sculpture and other creative endeavors. She was also a great cook. Over the 54 years they were married, she baked more pans of chocolate chip cookies for her husband than most would think possible. She is survived by her husband, Curt, two daughters, Cindy and Trudy, their husbands Drew and Vince, three granddaughters, Jamie, Kelsey and Sydney, her sister Karen and her husband Kent, one aunt, several cousins and other extended family. She was proceeded in death by her parents. A memorial service will be held on March 30th at 1:30 pm at Peace Lutheran Church, 828 W. Main St. Grass Valley, CA. A reception will follow the service. In lieu of flowers, the family requests donations to either The Interfaith Food Ministry of Nevada County or Hospice of the Foothills. Arrangements are under the care of Chapel of the Angels Mortuary.

Linda Williams passed away the evening of February 11, 2019, at her home in Grass Valley, with her husband and her two daughters by her side. She was born in 1945 in Houston, Texas where her father was serving in the Army Air Corps. Shortly... View Obituary & Service Information

The family of LINDA DIANE WILLIAMS created this Life Tributes page to make it easy to share your memories.

Send flowers to the WILLIAMS family.