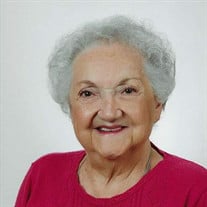 Mary A. Martinez of Grass Valley went to be with the Lord on March 14, 2019. She was 92. Mary was born in New London, Connecticut September 12, 1926. She was the third child of Anna Marie (Mary) Cappola /Capaldo. Her father was Beneditto Capaldo, known as the creator of the Submarine sandwich (Italian Grinder) during WWII. When Mary was seven years old her mother left New London for California with her three children in tow where they lived in Fontana and then Los Angeles. Mary often told stories of picking grapes, and wild mustard greens as a child in Fontana. Mary met Dann Martinez, while working at a malt shop at the age of 14. She did not date Dann until 1945 when he returned from military service. After Dann's persistent courtship, they were married May 11, 1947. Their early lives were filled with dances at "The Palladium"; an activity that always brought them great pleasure throughout the years. A graduate of Fremont High school in Los Angeles, Mary attended Beauty College, opening her own beauty shop in Los Angeles. She sold the business after the birth of her twin daughters Debra and Darra in 1951. Mary also had a son David born in 1960. The family lived in Norwalk originally and then moved to Placentia while the children were growing up. In 1991 Dann and Mary moved to Folsom California where they lived until 2012, then moving to Hilltop Commons in Grass Valley where they enjoyed their final years together with new friends. Mary was a tremendous cook and hostess with holidays and Sunday dinners at the Placentia house. No one ever went away hungry from a good Italian or Mexican meal. She was active in the Elks Lodge in Fullerton during their Placentia years, ever the social butterfly talking and sharing with everyone she met. Mary is survived by her three children, Debra (Jim) Voss of Penn Valley, CA, Darra (Scott) Drummond of Laughlin, NV, and David (Virginia) Martinez of Stockton, CA; seven grandchildren, 15 great-grandchildren, and an extended family of nieces and nephews. Mom will be greatly missed and remembered fondly by all who knew her. As she often said at the end of a phone call, "I guess I better let you go!" A memorial service will be held at 2 p.m. on April 13, 2019 at Hilltop Commons in Grass Valley. In lieu of flowers, please send donations to St. Jude Children's Research Hospital.

Mary A. Martinez of Grass Valley went to be with the Lord on March 14, 2019. She was 92. Mary was born in New London, Connecticut September 12, 1926. She was the third child of Anna Marie (Mary) Cappola /Capaldo. Her father was Beneditto Capaldo,... View Obituary & Service Information

The family of MARY A. MARTINEZ created this Life Tributes page to make it easy to share your memories.

Mary A. Martinez of Grass Valley went to be with the Lord on...

Send flowers to the MARTINEZ family.