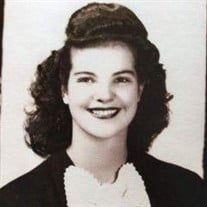 Nancylee Juvinall age 89, passed on to heaven on February 17, 2019. Mom was born on March 9, 1929 in Los Angeles/Long Beach, California. She was a orphan adopted by Emily Olney and raised in Southern California. She had three brothers, Jim(died 1998), George (died in WW2) and Bill (Sandi). She graduated from Venice High School in 1947 then moved to the Grass Valley area soon after. Her mother Emily (died 1966) and Emily's husband George Head (died 1970, age 86) had a forty-acre ranch at the end of Sontag Road off of You Bet road. One day while walking down the road she was spotted by Orford Juvinall who owned a ranch at the beginning of the road (owned now by Ms. Silver). Dad said he saw this beautiful brunette and it was love at first sight. They married in 1949 and started a family soon thereafter. Six children came out of that union: Cheryl, Todd, Loana, Valerie, Gaylord and Lillian. Mom loved the outdoors and was a fan of Yosemite where she camped out numerous times as a child and a mother. Mom and Dad were travelers and they belonged to the Good Sam's Club and traveled around the continent for many years until Dad's death in 1982. Mom decided she still wanted to travel and so, hauling the fifth wheel she did. Cabo San Lucas was her favorite spot and she went back and forth many times. She drove the Chevy truck and hauled that trailer by herself. She was known as a very friendly person and it took only a few minutes for her to gain new friends. And that was wherever she traveled. In her early life she desired to become a journalist and she was a good and prolific writer. Her penmanship was exquisite and we all looked forward to her letters about her travels. She worked in a bakery in her youth and in Grass Valley she worked the holidays at Tess's Gift Shop on Mill Street. She and dad loved to square dance and go to the movies. When they went to the movies, we waited up for them for the candy they would bring us. Always fun. Mom would take us all to the rivers in the area as she loved to swim. We all were taught to swim early on. Wonderful days on the Yuba in Washington, Jones Bar and Bridgeport back in the 1950's! She was a good cook and seamstress and made us all sweaters for many years. She won many blue ribbons at the Fair for her knitting skills. She was a 4-H mom in the 1950's in Peardale and taught her daughters sewing and knitting. Growing up she took piano/accordion, and tap and ballet dance lessons. We had an organ that she played for many years. Nancylee leaves her six children and seven grandchildren and one great-great. Tracy Furtado, Tony Juvinall, Trevor Juvinall, Christy Beck, Alix Aragon, Jacob Meech, Megan Dalett, Jenna Casto, Sam Gillis, Kate Collier, Aidan Beck, Preston Earley, Austin Earley, Ella Juvinall and little Wyatt Hewett. Mom is now reunited with the love of her life and heaven is in a joyous mood as they are dancing together, sharing a glass of wine and fishing for a dorado. No services will be done as per her request.

Nancylee Juvinall age 89, passed on to heaven on February 17, 2019. Mom was born on March 9, 1929 in Los Angeles/Long Beach, California. She was a orphan adopted by Emily Olney and raised in Southern California. She had three brothers, Jim(died... View Obituary & Service Information

The family of NANCYLEE JUVINALL created this Life Tributes page to make it easy to share your memories.

Send flowers to the JUVINALL family.