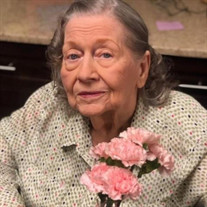 Peggy Asselanis was born June 23, 1933 in Franklin County Georgia, the second child of J.C. and Carrie Vaughan Vernon. Peggy grew up in Commerce, Ga., daughter of the local sheriff and seamstress. Peggy Vernon first noticed George Asselanis, then an ASAF ROTC Cadet, and his booming voice as he led the drilling of his fellow ROTC cadets from her desk where she worked in the Geology Department at the Univ. of Georgia. It was his attraction to her that made George switch from Geography to Geology. George and Peggy eloped on March 14, 1953 and were married in the Greek Orthodox Church in Savannah, Georgia, June 28, 1953, knowing full well their love for each other would overcome the obstacles of marrying outside their cultures in 1950’s Georgia. It did and continued to do so for 67 years. Peggy embraced the military life with George, moving and adjusting to the different bases assigned to. She volunteered at the base’s local Red Cross and was active in other philanthropic endeavors. Peggy was an artist who’s painting, ceramic and sculpture work beautified their home for over 40 years. An avid gardener in love with beauty she spent hours tending to the grounds of their beautiful home. Together, George and Peggy built a family of most loved and cherished children; Kosta, the eldest son, born in 1954, followed his father as an Air Force pilot and later flew for Northwest Airlines. Kara, the artistic daughter who resides in Grass Valley and co-owns the Curious Forge, and Jon, the youngest son, who followed his father’s love for geology and later his interest in engineering. All of the children were benefited and influenced by Peggy’s artistic nature, and in their own ways developed passions that deepened their lives through her example. Peggy passed away at Atria Assisted Living in Grass Valley after a long battle with dementia that started slowly in 2013. George and Peggy spent 45 year in the motherlode country where Peggy spent time devoted to beautifying their home and creating art. She spent 6 years in the Environmental Health Dept. at Placer County retiring in 1985. Peggy leaves her loving children; their daughter, Kara and their son, Jon; Grandchildren Jason and George Asselanis, sons of Kosta (and wife Debra); Grandson Rane Gridley, son of Kara and Jerry Gridley; Grandson Peter Asselanis, son of Jon and wife Tula, surrogate daughter Carol Hachmeister and her family; and many beloved relatives and friends. Peggy is predeceased by her husband George, son Kosta, and grandson Deklan Gridley. Family will attend a Trisagion Service and Memorial at the Chapel of the Angels in Grass Valley, Tuesday evening from 3-4 pm, and Ceremonies at the Sacramento Valley National Cemetery in Dixon at 1 pm on January 8th, where she will join George again. May her memory be eternal

The family of Peggy Asselanis created this Life Tributes page to make it easy to share your memories.

Send flowers to the Asselanis family.