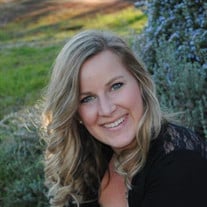 Rachael Marie Pool passed away on June 25, 2019 after fighting stage 4 breast cancer with everything she had until the end. She fought her battle with a smile on her face and a world of love surrounding her. Rachael was a truly genuine and beautiful person inside and out. She spread love and light to everyone she met with her infectious smile and unending positivity. Rachael’s positive attitude and enthusiasm for life led her to a career in Early Child Development. She worked in the field for 17 years, starting at Little Friends as a Preschool Teacher while she was in high school before moving to Southern California, where she attended Rio Hondo Community College. There she completed her studies in Early Childhood Development and Education and received her degree along with a Child Development permit. After moving back to Grass Valley, she began working in the After School Program and continued her education to gain her Site Supervisor permit. She grew to love working alongside adults and mentoring and supporting staff and coworkers. In 2017, Rachael was selected to become an Early Quality Matters Mentor and Coach for Nevada County. Her role as a mentor allowed her to work closely with multiple childcare centers and teachers, encouraging them to build their knowledge to provide high quality child care for our community’s children, something she was very passionate about. After moving back to Grass Valley, Rachael met and fell in love with her future husband, Kyle Pool. They were engaged in December of 2012 and married in October of 2013. Almost a year later, in September of 2014, they were blessed with a son, Levi. Rachael had always wanted more children and was overjoyed to have another boy, Bennett, in November of 2018, making their family whole. Late in August of 2018, we got the news of Rachael’s diagnosis of stage 4 breast cancer. She was 26 weeks pregnant with baby Bennett and started chemo immediately, with a smile on her face and optimism in her heart. Eight months into treatment she fulfilled a lifelong dream of seeing the Grand Canyon. Her family took a week-long trip, all packed into an RV, so she could be comfortable for the drive. Sitting on the edge of the canyon in awe, she said, “We made it!” Rachael was so giving in so many areas of her life, and was willing to spend extra time helping others succeed at their dreams. She was always being silly and supportive to her family and friends, no matter what. She truly had a passion for life and made it the best it could be. She was always there to lift those around her up, even reassuring and comforting us as we cried for her. Family meant everything to Rachael. She was a wonderful wife, best friend, and teammate to Kyle, and an amazing mom to Levi and Bennett. She was a sweet daughter to her parents, Diane and Joe Morphew, a wonderful granddaughter to her grandparents, and an awesome sister to her siblings Jamie and Joe and their families. Rachael’s family would like to thank, from the bottom of their hearts, all those who touched her life and were there as an inspiration, friend, shoulder, and so much more. Thank you, also, to those who donated and continue to donate to her cancer treatment fund for her family. A memorial service will be held on Saturday, July 6th for family and close friends. All friends and supporters are invited to attend a Celebration of Life on July 19th at 1pm at Twin Cities Church, 11726 Rough and Ready Highway, Grass Valley, CA.

Rachael Marie Pool passed away on June 25, 2019 after fighting stage 4 breast cancer with everything she had until the end. She fought her battle with a smile on her face and a world of love surrounding her. Rachael was a truly genuine and beautiful... View Obituary & Service Information

The family of Rachael Marie Pool created this Life Tributes page to make it easy to share your memories.

Send flowers to the Pool family.