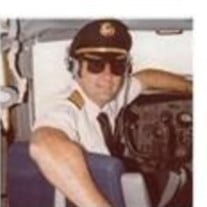 Richard (Dick) Core was born in Indio, CA to Dewey and Cecilia Core on February 1, 1936. Even though he was a fourth generation Californian, he considered himself an Alaskan, where he spent his formidable years. The family moved to Anchorage in 1950 and he graduated from Anchorage High in 1953. Dick always had a strong appetite for adventure. Alaska was just the place for adventure, where it was common to go fishing by float plane and everyone had moose in their freezer. At 19, he and a friend went gold prospecting and at 21 he decided to take a trip to see the world. He and an another friend spent all their money on first class tickets on the Queen Mary and sailed from San Francisco to Sydney, Australia and then took the Fairsea through the Panama Canal to England. Returning to Anchorage he spent time in the Army Reserves and met his wife, Janet “Jan” Hamacher. Dick embarked on a career as a commercial airline pilot and flew for TWA for over 25 years and retired as Captain in 1991. He pursued flights to exotic places so he could continue to experience the world. Dick was an avid golfer and was a member of the Alta Sierra Country Club for over 40 years. Last year at 83, he shot two holes-in-one. He was a founding member of the ASCC Bandits and was honored as a Bandit for Life. Dick is survived by his wife, Jan of nearly 61 years, sons Gary and Grant (Jeanne), daughter Gael (Lee) Bruno, grandsons Ryan, Jordan, Gabriel (Shannon) and Michael Bruno, granddaughter Sydney (Chris) Martenis and three great grandchildren Madelyn, Charlie and Roman Martenis. Dick lived a full life, full of adventure and plenty of mischief. He had a quick wit, loved his family and was a loyal friend. He could tell a joke or a great story like no one else and the place most sought at family gatherings was next to “Pacu”. He spent his last Father’s Day amid his family with all having the opportunity to wish him farewell. He was surrounded by the love of his family when he flew west as all good pilots do on June 27, 2020. Memorial Contributions may be made to Cancer Research Institute, Hospice of the Foothills or a charity of your choice.

Richard (Dick) Core was born in Indio, CA to Dewey and Cecilia Core on February 1, 1936. Even though he was a fourth generation Californian, he considered himself an Alaskan, where he spent his formidable years. The family moved to Anchorage... View Obituary & Service Information

The family of Richard "Dick" Core created this Life Tributes page to make it easy to share your memories.

Richard (Dick) Core was born in Indio, CA to Dewey and Cecilia...

Send flowers to the Core family.