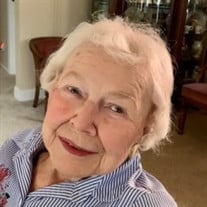 Rosalie was born at home on her family’s farm July 1, 1919 in Shelby County, Illinois. She was the youngest daughter of Alpha and Harry Storm, and had three sisters: Marie, Elisabeth and Ramona. Rosalie attended Fremont School, a one room schoolhouse, and rode her pony to and from school. She attended Windsor Community High School where she met Dean Kearny, the love of her life. Rosalie graduated from WCHS in 1937. After graduation she left for Chicago and worked as a secretary for 15 months and then came home to the farm and her high school sweetheart, Dean. Rosalie and Dean were married in August of 1939 in Missouri and lived in Strasberg, Illinois. They had one daughter, Beverly Joan Kearney. WW II came and in 1943 Dean joined the Navy and left for the Pacific. He was gone for 2 1?2 years and never missed a day without writing to Rosalie and Bev. During the War, Rosalie worked as a secretary for Caterpillar Mfg. in Decatur, Illinois. After the War, she worked for Pi Beta Phi Headquarters as a secretary for the next 12 years and then part time for several years. She was the caretaker for her mother and father for the next 3 years until they passed away. Rosalie worked as the head of entertainment for her family and friends and if you were lucky enough to be invited to a Holiday Dinner at the Kearney’s it was the highlight of the season. Rosalie loved music and enjoyed singing and playing piano and a Swinger organ. Her most important job was being mother to Beverly, a loving wife to Dean, and Aunt Rose to three nieces Jodi, Bonny and Victoria. They had a wonderful life in Decatur with countless friends. Bev presented them with two beautiful granddaughters, Katie and Jenny. In 1981, Bev married Monte Martin and Rosalie gained 2 more grandchildren, Phil and Holly. She had nine great grandchildren and two great grandsons! In 2007, Rosalie and Dean moved to Grass Valley, California to be closer to their daughter Bev, where she continued to enjoy her extended West Coast family. Rosalie became a member of the Grass Valley United Methodist Church. Rosalie enjoyed her final years in Grass Valley, making many new friendships along the way and spending time with her family and loved ones. Rosalie passed away peacefully at 101 years old, and will be laid to rest in Ash Grove Cemetery in Windsor, Illinois, alongside her husband, Dean, and extended family.

Rosalie was born at home on her family&#8217;s farm July 1, 1919 in Shelby County, Illinois. She was the youngest daughter of Alpha and Harry Storm, and had three sisters: Marie, Elisabeth and Ramona. Rosalie attended Fremont School, a one... View Obituary & Service Information

The family of Rosalie Storm Kearney created this Life Tributes page to make it easy to share your memories.

Send flowers to the Kearney family.