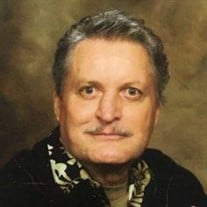 Thomas Leon Marshall was called to God on Sunday, February 17. He was born on April 21, 1946 in Billings, Montana, the seventh child of William and Gertrude Marshall. His birth date was Easter Sunday of that year and on this Easter, April 21, 2019 he will have been 73 years old. His family moved to the San Francisco Bay Area where they lived first in Richmond, then moved to Pinole, CA where Thomas grew up with his seven siblings (his sister Bernadette was born after their move to California). He is preceded in death by his parents, William and Gertrude, sister Lois, brothers John and Jim, brother-in-law Alan Webber, sister-in-law Veta Marshall, nieces Elizabeth and Marie, nephew Troy, and grandnephew Travis. Thomas is survived by Sisters Kathleen, Bernadette (Gerald Benham), Brothers David (Matilda) and Michael (Linda), also nieces, Victoria, Margaret, Mary, Charisse, Anna, Colette, Stephanie, Bernice, Darian, Kirstin, Susan, Michele, Melissa, and Amy, and nephews Christopher, Damian, Paul, William, Kenneth, Nathan and Michael Jr. as well as many grand-nieces and nephews. He had many cousins as well. All will miss him dearly. Thomas attended St. Cornelius Grammar school in Richmond, and graduated high school from St. Vincent Ferrer in Vallejo. He then went to St. Mary's College in Moraga to study Art, then after one year decided to move to the Los Angeles area. Upon the death of his father several years later, Thomas returned to Pinole to help his mother. In 1971 he and his mother, Gertrude moved to Nevada County just outside Nevada City, then to homes in Nevada City proper. This was a special place for all the family to gather for special occasions and holidays. After his mother's passing, he returned to the Los Angeles area, then Palm Springs. He returned to Nevada City in 2013 and most recently lived in Grass Valley. He loved this mountain area. He continued with his artwork over the many years and opened a lovely gallery and gift shop in Nevada City in the 1970's where he displayed his own work and that of the many artists in this community. He spent time in France whereby he produced many pen and ink drawings and charcoal sketches. Thomas loved all plant life and animal life. He had several Borzois over the years and bred those producing wonderful pups. He brought parakeets home when he was very young, so Bill and Pete were our 'family pets', walking outside their cage and hopping onto the sofa or wherever we were. He raised pigeons while in Pinole which is where Borzois also entered into our lives. He liked exotic plants, as well as the simple gladiolas, cyclamens, sweet peas, and all cut flowers. Thomas chose the confirmation name of St. Francis of Assisi and truly lived up to that name with his love of all living things. Services will be at St. Canice Church in Nevada City. March 1, Friday will be the viewing at 6pm followed by the rosary at 7pm. There will be a funeral mass at St. Canice Church Saturday March 2. At 11 am. followed by the burial then a reception at St. Canice Hall on Reward St. Donations in Thomas' name may be made to The Humane Society of Nevada County and flowers are always welcome. Arrangements are under the care of Chapel of the Angels Mortuary.

Thomas Leon Marshall was called to God on Sunday, February 17. He was born on April 21, 1946 in Billings, Montana, the seventh child of William and Gertrude Marshall. His birth date was Easter Sunday of that year and on this Easter, April 21,... View Obituary & Service Information

The family of THOMAS LEON MARSHALL created this Life Tributes page to make it easy to share your memories.

Thomas Leon Marshall was called to God on Sunday, February 17....

Send flowers to the MARSHALL family.