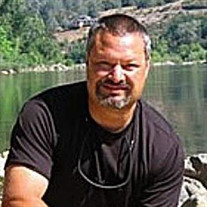 Thomas Joseph Meinholz Jr. was a generous free-spirit who passed away due to an accident occurring on March 18, 2019 in Nevada City, California. He was 52 years too young. Tom is survived by his loving wife Cara, his daughter Skyler, his mother Luanne, his sisters and their partners Trudy and Michael Whyte, Theresa and Kasey Gray, Tricia and Amanda Meinholz, his brother-in-law Marc and wife Pam Warburton, brother-in-law Curt Warburton, and his many nieces and nephews. Tom was the son of Thomas Joseph Meinholz Sr. and Luanne Meinholz. He was born in Madison, WI and grew up in Middleton, WI. Tom attended the University of Wisconsin in both Madison and Platteville, and obtained a BS degree in Civil Engineering. He became a Licensed Professional Engineer and was offered a job at the California Dept. of Transportation. Tom moved to California for this position and for its outstanding whitewater. Tom and Cara met and fell in love through a kayaking class that Tom was teaching in Santa Cruz. They married in 1998. Cara's medical school and residency subsequently took them to Salt Lake City and Fresno before they settled down in Nevada City near the South Yuba River. Tom was a kind and generous man who loved the outdoors, where he always created adventures. He excelled at many outdoor sports such as mountain biking, skiing, snowmobiling and motocross, but his great passion was whitewater kayaking. He was proud to have completed first descents of rivers in Mexico and Bhutan. Tom was an excellent kayak instructor and taught many people over the years including a star pupil Skyler, his daughter. Tom loved to travel especially to kayak or bike (even though he hated flying) and visited more than a dozen countries across Asia, Europe, Africa and South America. And as part of his nature, Tom would often invite his friends and family along to join in his adventures. A community-minded person, Tom helped build both a library and a climbing wall at Grass Valley Charter School. He was always ready to lend a hand, and was the kind of guy who knew how to solve problems and who you wanted beside you in an emergency. He enjoyed projects big and small and inspired people to push their limits. Tom will be dearly missed by his family and friends for his kindness, his companionship and his wonderful laugh. We'll see you at the take-out, Tom. A celebration of Tom's life will be held on July 20. Contributions in lieu of flowers may donated through https://cruzean.wixsite.com/tomliveson

Thomas Joseph Meinholz Jr. was a generous free-spirit who passed away due to an accident occurring on March 18, 2019 in Nevada City, California. He was 52 years too young. Tom is survived by his loving wife Cara, his daughter Skyler, his mother... View Obituary & Service Information

The family of THOMAS JOSEPH MEINHOLZ JR created this Life Tributes page to make it easy to share your memories.

Thomas Joseph Meinholz Jr. was a generous free-spirit who passed...

Send flowers to the MEINHOLZ family.